A studio in Vienna 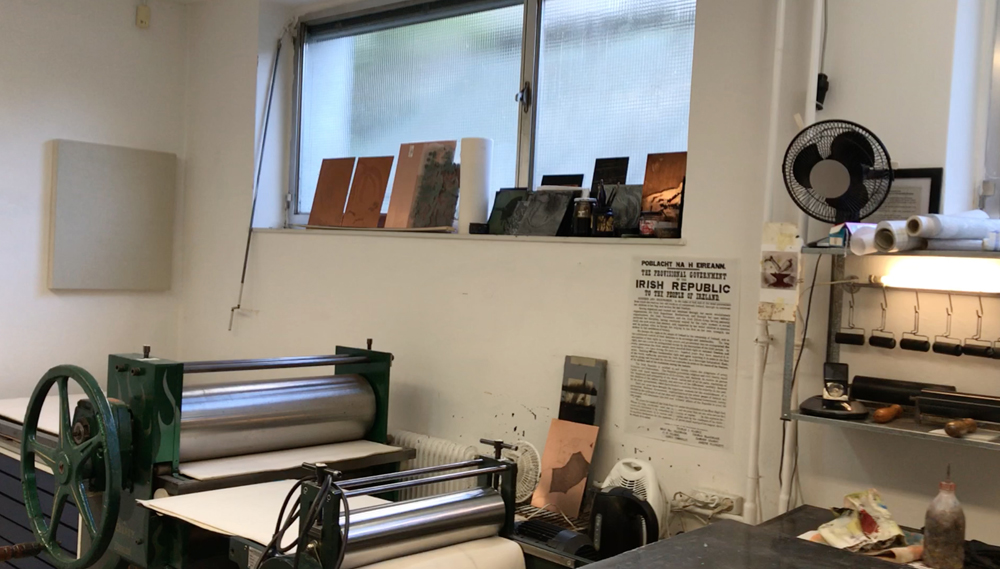 We thought it would be interesting and inspiring to see some of our artist’s studios during lockdown. We love seeing where the work is being created and wanted to share!

The first is artist Tom Phelan whose solo exhibition was to be on in the gallery during April 2020. We have re-scheduled for a later date (to be confirmed) but in the meantime here are some of his thoughts!

Gallery: Do you feel this new body of work is a departure from what you were making before?

Tom: I don’t really feel that they are a departure from my other work. I tend to see the work as an ongoing development. The previous works were based on surfboards and the ocean and the paintings in this show also draw inspiration from the changing colours of the sea and the light. The light of California, where these original surfboards and colour combinations came from, has been a continuous source of interest to me, including the artists of the Light and Space Movement from the 1960s.

Although of a different subject matter, the paintings I did on the city of Vienna were also mainly based on the colours seen around town. The textures I tried to convey in these works have also very much contributed to the look and feel of the new paintings.

Gallery: You moved to Vienna a number of years ago and tell us how that influenced your work?

Tom: Moving to Vienna simply made it possible for me to rent a studio for myself to work in. While I was working in the Graphic Studio it was impossible for me to afford time off from the studio and the cost of renting somewhere else to progress with my own work.

As I had always lived near the coast in North Dublin, a lot of my time was spent on North Bull Island walking or swimming throughout the year. So moving to a landlocked country really had a profound effect on my bearings, and it still has. The coast and its open horizons and the changing weather is something I miss terribly.

Gallery: Unfortunately COVID – 19 has affected everyone globally but what impact has it had on your creative process?

Tom: Probably none in relation to my work and what I am interested in painting. Its affect at the moment are purely monetary and that I can’t afford to buy any materials which I am running out of. Plus all the shops are closed on top of it. As none of us know how long this lockdown will last, it is important to keep an eye on the diminishing bank account.

But hopefully all will return to normal eventually and I am very looking forward to seeing the paintings up on the walls of the gallery.

Thanks Tom, us too!
You can take a virtual tour of Tom’s studio in Vienna here.