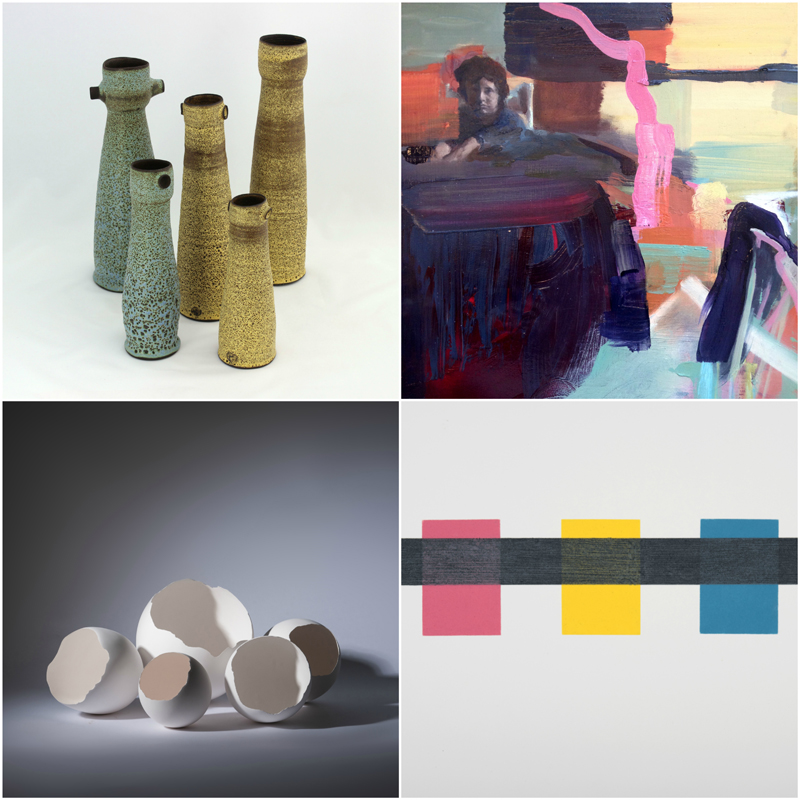 Following the success of our 2014 exhibition ‘Young’, SO Fine Art Editions is pleased to announce the next installment ‘Young II’. This multidisciplinary exhibition will feature printmaking, photography, painting, sculpture, bookmaking and applied arts by an exciting group of young visual artists emerging into Ireland’s ever diversifying art scene. These artists are the best on the scene in their particular mediums with many having received awards and recognition for their work. They are pushing boundaries, exploring fresh concepts and challenging perceptions in order to generate conversations and engage audiences.

Please click on each thumbnail for full image. More images to come.

Ailbhe Barrett – a printmaker, painter and curator who lives and works in Limerick and Dublin. Her painting mainly features Irish landscapes.

Magda Bethani – In 2012 began working with ceramics on a full-time basis and was accepted onto the Crafts Council of Ireland’s Ceramics Skills and Design Course. She exhibited at the National Craft Gallery and the Blue Egg Gallery. In 2014 she established her own studio in Newtown Mount Kennedy, Co. Wicklow. Recently won the Graduate Award of Lewis Glucksman Gallery, Cork.

Cathy Burke – previously worked as a horticulturalist, garden columnist, teacher and consultant. Awarded a First Class Honours Degree in Craft Design – specialising in Ceramics, from NCAD in 2014. Drawing on her horticultural background, her work merges plant and tool forms, as her interests lie in the contrasts and comparisons between these forms. Her surface treatment references decay and regeneration symbolising similarities to ancestral continuation.

Cathy Cannon – Printmaker and painter, born in Bath, England. Studied in Limerick School of Art and Design. Lives and works in Ireland.

Sophie Carroll-Hunt – Currently completing a BA (Hons) in Visual Art Practice at Dún Laoghaire Institute of Art, Design and Technology. Her work has been exhibited in The Library Project, Dublin, Pallas Projects Dublin and The Mart, Dublin.

Neil Dunne – an Irish printmaker, specialising in screen printing. Dunne graduated from NCAD in 2014. He was awarded the AXA Insurance Award (2014), nominated for the NCAD Staff Prize (2013), was a finalist in “Your City, Your Print” from Industry & Co. (2013) and was a recipient of the Mary Cawley Travel Bursary (2013). Dunne uses layers of drawings, photographs and found objects to record and document creating thought provoking work enriched with emotion and nostalgia.

James Earley – A Dublin based artist, Earley’s style pays homage to his family’s rich heritage in ecclesiastical stained glass artwork which he brings into both his highly acclaimed large scale urban paintings and his fine art prints. Graduated from NCAD, Earley works as an artist, curator and graphic designer.

Melissa Ellis – An award-winning artist and print-maker whose work explores what is real and what is imaginary – the creation of other worlds and the animals that might live in these strange worlds. Taking inspiration from Edgar Allan Poe and Mary Shelley Ellis draws on their strange and unnatural narratives.

Kevin Killen – Studied at the Surrey Institute of Art and Design University College (now the UCA), specialising for one year in 3D Design and two years in Fine Art. He continued his training in Dallas Texas, studying neon glass skills; developing his long term interest in neon. Now based in Northern Ireland, Killen explores issues of boundaries and behavioural patterns using the medium of light.

Allan Kinsella – Currently completing a BA at Dún Laoghaire Institute of Art, Design and Technology, his paintings, both on board and copper have been exhibited in Pallas Projects, Dublin.

Richard Lawlor – Completing a BA at Dún Laoghaire Institute of Art, Design and Technology, Lawlor’s work comments on the role of social media and youth’s belief in immortality.

Sabina Mac Mahon – graduated from the National College of Art & Design with a First Class Joint Honours in History of Art and Fine Art (Painting) in 2008 and recently received an MA (Distinction) in Museum Studies from the University of Leicester, England. Mac Mahon has received several funding awards and participated in artist residencies at Albert Cottages, Dublin City Council Arts Office (2014-15); DIT School of Art, Design & Printing (2013); The Guesthouse, Cork (2012) and Cow House Studios, Wexford (2011). She is co-curator, with fellow artist David Quinn at Taylor Galleries and combines her art practice with work as an arts administrator, gallery assistant and researcher.

Peter Martin – A graduate of the Crawford College of Art and Design where he has specialised for two years in stained glass and glass casting. He studied the processes of kiln fired glass casting as part of an exchange with the Glass Department in the Fine Art College of Shanghai University in 2013. His current work investigates subconscious narrative placed in the urban landscape of his hometown. Martin uses traditional stained glass techniques to depict this imagery.

Jamie Murphy – Having studied History of Art & Design and Visual Communication, in 2006 Jamie Murphy graduated with a first class honours degree from the National College of Art & Design in Dublin. In 2012 Jamie completed his two year MA in Design completely through letterpress printing at Ireland’s foremost letterpress facility, Distillers Press, NCAD, Dublin. Jamie has recently been awarded by the NUI, RDS and the IDI for Printmaking, Publication Design and Typography. He won the IDI Graduate Award 2013.

Liam Murphy – a photographer based in Dublin. Having trained in New York and Milan, he continues to shoot commissions for leading advertising and design agencies, fashion labels and designers, as well as having his editorial work featured in numerous magazines and publications. His advertising work has been awarded at ICAD and the Sharks, featured in Lurzer’s Archive and been shortlisted at EPICA. While Liam’s personal projects have been exhibited in Ireland and internationally.

Sasha McVey Award winning Artist Sasha McVey specialises in Ceramics, creating a range of high quality contemporary works from exclusive delicate Sculptures, Functional Wares, Gifts and Commissioned Ceramics. Graduating from the University of Ulster, Belfast with a BA Honours in Contemporary Applied Arts in 2014. She has since went on to exhibit throughout Northern Ireland and has gained a place on the prestigious Craft Northern Ireland Making It programme. Sasha has received international recognition with a certificate of excellence from the Arts and Crafts Design Award. As well as recently being awarded Northern Ireland Young Artist of the Year 2015.

Lesley-Ann O’Connell is an artist living and working in Co. Meath. She graduated with a Masters in Fine Art from the National College of Art and Design in 2014 where she also received her degree in 2008. She has exhibited in group shows within Dublin as well as Carlow, Galway, Waterford and Leitrim. Her work is held in the public collections of The Office of Public Works, Impact and AXA Ireland. O’Connell’s paintings are about colour, surface and space.

David O’Kane – Studied from 2007 until 2012 in Leipzig under professor Neo Rauch at the Hochschule für Grafik Buchkunst. He received an extended DAAD Scholarship for his studies in Germany. He also holds a 1st Class Joint-Honours Degree in Fine Art from NCAD in Dublin (2006). O’Kane has won numerous awards, scholarships and residencies. In 2014 he was shortlisted for the Golden Fleece Award in Dublin. He was resident artist at the Stiftung Starke in Berlin from 2010 until 2013. He was awarded the Derek Hill Foundation Scholarship and Residency at the British school at Rome in 2009. Tom Morton awarded him joint first prize at the Claremorris Open Exhibition.

Etaoin O’Reilly – a ceramic artist living in Dublin. Graduated from The National College of Art and Design in 2014 with a first class honours degree in Craft Design. She moved to London where she interned for ceramic artist Kate Malone. On her return she moved to the National Sculpture Factory in Cork where she continued to develop her degree show work. Called the Buggaplants, this work is based on nature and how it attracts its prey. Etaoin has continued with this work in The National College of Art and Design where she is currently working as an artist in residence.

Eileen O’Sullivan is a visual artist based in Meath/Dublin. Her work explores ideas of comfort, belonging and place. O’Sullivan studied Fine Art Painting & Art History in the National College of Art and Design, Dublin and has featured in many group exhibitions in Dublin, Louth, Meath, Clare and Antwerp.

Yestin Reboul – Reboul’s work explores the human figure and aims to reveal its earthy connection and the natural qualities of clay. Often finished with smoked firing or saggar firing. Reboul works with different scales from small sculptural works to life-size sculptural pieces, finding the balance between the weakness and strength of the clay, often working the material to its limits suggesting the contrast of collapsing and emerging.

Aoife Scott – another Dublin based visual artist. Scott graduated from NCAD in 2013, receiving the Graphic Studio Graduate Award and The Printmaker’s Gallery Purchase Award. Scott’s practice is concerned with solidifying and preserving while at the same time re-inventing memories and specific moments through the printing process.

Julie Scott a ceramic artist practicing in Northern Ireland. Having graduated with a BA Honours in Fine and Applied Art with First Class Honours in 2012, she now works from her studio at The Belfast School of Art. Julie Scott sees herself as a maker of ornate, beautiful objects. Her work is recognised for its high levels of fine, hand-built detailing. Clay is textured with vintage laces and finished with oxides, glazes, crackled glass and gold lustre.

Evelina Wojtowicz graduated from University of Ulster in 2012 with with BA (Hons) 1st Class in Fine and Applied Arts. Her work was exhibited at the 2014 European Ceramic Context in the ‘New Talent’ category. In 2013 Evelina won a Sculpture in Context Award and the Ceramics Ireland Award at the Mill Cove Gallery. In 2012 she received an Outstanding Student award from the Royal Ulster Academy and first prize in the Ceramics category at the RDS National Crafts Competition. She has participated in ceramic symposiums and residencies in Europe and the USA.

We will also be including a selection of artists from GUM, a collective of Dublin based visual artists:

Stephen Lau is a visual artist who has recently graduated from the national College of Art and Design with a degree in Fine Art Printmaking and the History of Art. Stephen is a member of the GUM Collective a group of Dublin based artists who have recently completed residencies in the RHA School and the Black Church Print Studio. His drawings play with ideas surrounding congregations and frenetically pointless tasks and activites.

Ciara O’Brien‘s work presents tension, release, control and spontaneity through her expressive mark-making and construction of the work. O’Brien focuses on the movement of the body to create her art and the motion of the space left behind in its wake, resulting in work that is fluid and thoughtful.