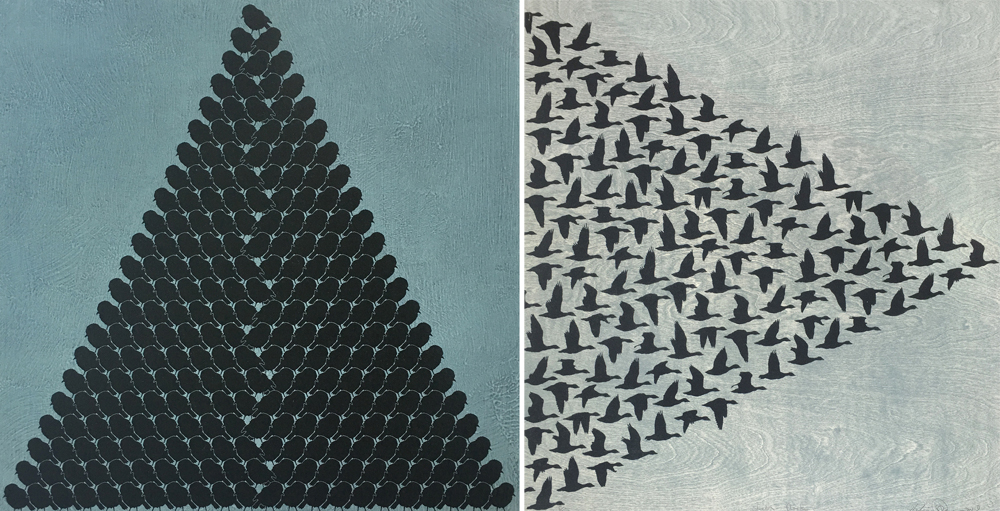 SO Fine Art Editions presents ‘Skein’, a series of new works by Kelvin Mann, which tells the story of the near decimation of New Zealand’s black robin and it’s survival against the odds.

Before settlers arrived in New Zealand the country was effectively a bird sanctuary with no mammalian predators. In these utopian conditions many birds lost the ability to fly and had no self preservation “fight or flight” instinctual behaviour to protect them. With the arrival of Polynesian and later European settlers, as well as the introduction of mammals such as rats, ferrets, cats and stoats, many of these birds had been wiped out to the point of extinction.

One such bird was the Chatham Island robin, or black robin which had been confined to Little Mangere Island, off the east coast of the South Island by 1870. During the 1970’s and 80’s conservationist Don Merton lead a team to save this tiny bird whose numbers at one point dropped to only five. There were two adult females and of that pair only one, Old Blue, managed to successfully rear chicks. Today there are an estimated 250 black robins, all descended from Old Blue who sits unequivocally at the top of her family tree.

Additional images capture flocks of wild geese or swans in a V-shaped formation or ‘Skein’ as the title implies and as with a Skein of migratory birds this stack of Black robins forms the strongest of all geometric shapes, a triangle. This shape in its boldness and simplicity proves to be very versatile within the confines of a square format of a picture plane, nestling into corners, halving and intersecting.

Born in 1972 in Dunedin, New Zealand, Kelvin Mann was educated at the Otago School of Fine Art, NZ. Employed as an animation artist by Vidmark Television, NZ from 1994-1996. In 1997 he moved to Dublin to become a member of the Graphic Studio Dublin.  He has worked as a printmaker at Stoney Road Press in Dublin since 2002 and shows in Ireland, the United Kingdom, New Zealand and Australia.

Click on the thumbnails below to see larger images of the works.