Johannes Eidt Against the Wind 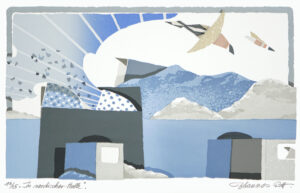 Eidt is known as an artist of modern classics and has always preferred to be identified as a printmaker rather than a painter, with silk screen printing being his chosen medium. His work is known for its graphic nature portraying unusual subject matters and employing bright blocks of colour in whimsical settings.

After studying at the National Academy of Fine Arts in Stuttgart from 1956 to 1958, Eidt left Germany to travel. He eventually settled in Japan from 1959 to 1962, where he studied graphic art, specialising in screen printing and lithography, at the Tokyo National University of Fine Arts and Music. It was in Japan that Eidt gained inspiration for his print and collage works.

Although he returned to Germany in 1963, setting up his studio in his native city of Osnabrück, he has regularly worked, lectured and exhibited in Japan, spending overall ten years of his life there.

He is a member of the renowned Shun’Yo Kai Art Society, where Eidt was the first non-Japanese artist to win their prestigious 1st prize at their annual show in 1981. In 2012, he was awarded Germany’s ‘Federal Cross of Merit’ for his service in the arts.

Eidt has lectured at the Tokyo National University of Fine Arts and Music (now Tokyo University of the Arts), the University of Hildesheim and the Machida City Museum of Graphic Arts. His work has been shown in many individual and group shows in Germany, Japan, USA, Australia and Europe.

In 2004, he showed works in Ireland with other Japanese and Irish artists in collaboration with the Yanagisawa Gallery Tokyo, the Model Arts and Niland Gallery in Sligo, and the Graphic Studio Dublin. A retrospective of Eidt’s works took place in 2007 at the Kunsthalle Dominikanerkirche in Osnabrück.